Runner up Dan Bates in Shearwater Insurance Search for a Star competition letting you know about my month and what a month!!

My Shearwater kit arrived in a box so big I could of climbed in it! It was amazing, navy, white and red and very professional looking now I just needed somewhere to wear it and boy did I choose some great people and locations to be photographed with and at.

It started on the 17th May when I received the most fantastic birthday present from Levi William Hunt, he invited me to his yard in Tewkesbury and gave me the opportunity to ride a Grand Prix Dressage horse. I did flying changes and passage and it gave me a glimpse of the future I want and it felt fantastic.  I was more than a little overwhelmed to be given such a gift and even got a photo I will treasure for a lifetime.

On the 19th May it was my 19th birthday and with me and Wilson kitted out in our Shearwater clothing and with the sun out we had a professional photo shoot with the very talented photographer Martha Lily, she did us both proud and took some stunning photographs.

I was then invited by Levi William Hunt to watch him compete at Somerford Premier League Dressage over two days with his two beautiful horses Frappuccino and Abbey Tiron who were true superstars. I got to watch him win the Inter 1 and place 3rd in the PSG and couldn't of been more honoured to have been there to watch in person and in the company of such a kind and generous rider.

And then! I got to meet Great Britain's Olympic Dressage rider Mr Carl Hester, who helped me through a difficult time at the beginning of this year when I nearly gave up riding and very kindly sent me a gift that helped me decide the saddle is where I needed to be.

It gave me a chance to thank him in person and I have to say he is one of the kindest and most genuine men I have ever met and was kind enough to give me the photo opportunity to go with the gift I have.

I'm not sure how June is going to beat this month but I will keep you all updated. 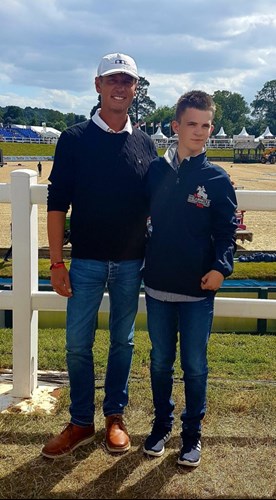