Once again the Young Horse Finals drew a capacity crowd on the final day of the 2021 British Dressage National Championships.  All eyes were on the best 4, 5 and 6-year-old dressage horses in the country.  Three young horses stood head and shoulders about the rest, all with three key attributes, all had an impressive hind leg, all showed trainability and all three were black and extremely eye catching. 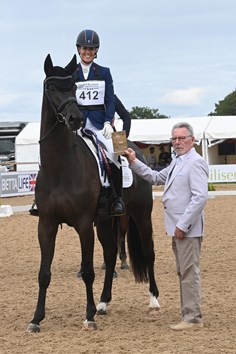 A beautiful looking horse, with great energy, an amazing hind leg and elegance in abundance - he really was the perfect type of dressage horse.

It was not only the judges who were impressed by Mon Amour’s natural athletic movement, but commentators Kim Ratcliffe and John Bowen also commented, “With hindlegs like that, there’s no doubt that he’ll make it. That hindleg is just unbelievable. It’s not just the hock movement but the entire musculature and movement through the hindquarters.”

Ride judge Tom Goode said, “He’s a super horse. He has amazing balance for a four-year-old, he’s really good on the aids and equal both sides – he’s an exciting horse.”

A delighted Charlotte, who is no stranger to winning the young horse classes, commented “I have to say ‘Monet’ is my perfect horse. I’ve ridden a lot of special horses and he’s right up there with them. He has everything you could want; he walks like he’s going to piaffe, his canter is amazing and already does a change when you put your leg back and he never runs out of energy. His desire to work – he just wants to keep working and working. Plus, he’s so good looking – he literally has it all! There isn’t anything he’s missing, his trainability is unbelievable. 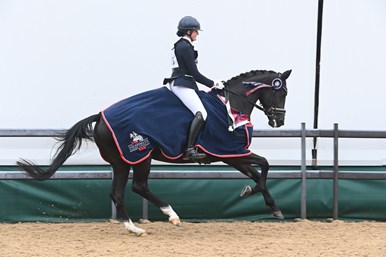 Elite Dressage’s black mare, Tiger, lead from start to finish, heading finished top of the leaderboard in the preliminary assessment and ultimately taking the 4-year-old title under Beth Bainbridge. Both judges described her as being a very nice mare, with flexibility through the joints and appearing to be very trainable to go through the levels.

Tom Goode clearly enjoyed the ride on this remarkable young horse adding, “she’s a lovely horse who gives a really nice feeling. She has a lovely energy and is well trained.”

“I’m so proud of her!” beamed Beth afterwards. “She [Tiger] went in and felt like a champion today. She saw the crowd and was like ‘okay, I’m going to do this’! She was amazing, absolutely amazing. Like a five-year-old, she looked at the crowd and took it all in, but she performed like an absolute professional. 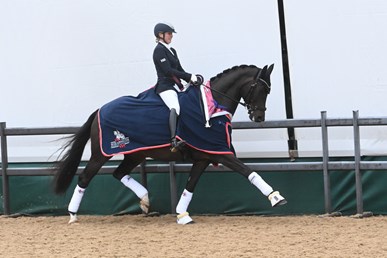 A high-quality trot and canter with a great hindleg caught the eye of all three judges. Tom Goode also remarked on the mare’s super self-carriage and response to the aids. “She has the attributes to be a top horse and is exciting for the future,” he said following his ride.

Both David Hunt and Erik Theilgaard commented on the mare's beauty, elasticity, suppleness, lightness, elegance and power, dubbing her a "dream dressage horse".

Their prize-giving was rather eventful as poor Sadie hit the deck when she tried to put the rosette on the mare’s bridle… ‘Dia’ had a canter about the ring, Sadie remounted, then her rein broke, so she didn’t get a proper lap of honour!

After she’d dusted herself off, Sadie said, “I was so pleased with her today. In the first round on Friday she was really confident and taking me. She did everything in the test really nicely. She hasn’t done a championship quite this big before; I did the championship as a five-year-old at Keysoe last year but that was obviously different. She’s come here, just got on with it and it’s like she’s done it all her life. I was a bit worried that she might be a little bit tense with the crowd and the other rider getting on but she was really good. She looked really lovely with Tom on. She’s so nice to ride and I hoped he’d like riding her – she was such a good girl for him."

Get A Quote Today