Long time competitor of the Shearwater Young Horse classes Becky Moody tells us a little about the two horses she has in the four-year-old final this year.

I am lucky enough to have two horses qualified for the finals.

James Bond 2 is a 4 year old stallion by Desperado out of a fidertanz mare. Owned by Jo Cooper who bought him last November, he is lovely to handle although would like to ALWAYS have something in his mouth. He has only done a couple of shows this year, but is a KWPN graded stallion

Jack Diamond my other 4 year old stallion is by Electron out of a Diamond Hit mare. Also owned by Jo Cooper. He has been with us for just over a year now - we got him as a just backed 3 year old. Like James Bond - he has only done a couple of shows. Around the yard he has a super sweet temperament for a young stallion and loves hacking out and sleeping!

Nope - I have competed in it many many times

Buying super glue so I hopefully won’t fall off! I like to keep the horses work regime varied - we will be training to hopefully have the horses at their peak performance without working their young limbs and minds too hard.

They are a great show case for our young horses, enabling us to get them out to see the world. They are a good place to start a young horses career - I have a horse called Carinsio who won the 4 year olds and was supreme champion as a 5 year old - aged 11 he is now an International Grand Prix horse. It’s also a great class for the public to watch.

Hancock has been very consistent all year in the top placings of both young horse and novice and elementary classes including the selection trials for the Young Horse World Breeding Championships at Bolesworth, scoring up to 80%. At home he is a cuddle monster, he is a huge horse and loves to put his head behind your shoulder and pull you into his chest for scratches!

I myself am a seasoned competitor in the Shearwater classes. I won the 4 year old Final in 2013 on the stallion Eldorado as well as being second in the same class on a homebred gelding, Don Fulcher. Since 2010 I have had a horse in one of the Shearwater Final classes at Stoneleigh every year and had high places.

To prepare for this years Finals I will make sure that Hancock is fit enough and comfortable with all of the movements in the test.

He has also qualified for the Novice and Elementary Gold Finals so I hope to do well in these classes as well at the Nationals. My ambition with this horse is to make and be successful at International Grand Prix!

I enjoy the Shearwater Finals because it is a chance to judge how your horse is doing compared to other horses of the same age. I feel it's a great spectacle to showcase the best horses of each year group to an enthusiastic crowd at the Nationals. 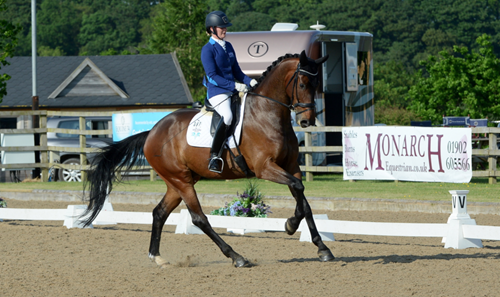