I hope you are all well and have had a brilliant time with your lovely horses over July. This month surely has been a busy one for us. After a very quiet June it is a shock to the system to have 3 events to report on for this blog (don’t worry I will try my best to keep it short and sweet)! The blazing sunshine has continued and I think it is fair to say we have had sweaty ponies and sweaty riders trying to compete in it. The flies continue to torment us and if anyone has found a super fly-spray that works please let me know! Nevertheless, the GG’s – George and Gus – have been on flying form and I feel we have had one of those very lucky months...

First up was the Pony Club dressage on the 7th July. We had both the boys entered in the top class which was equivalent to an elementary level test. Gus started his remedial shoeing in June and sadly we weren’t sure whether he was going to make it. However, being the trooper that he is, he showed enough improvement that the vet was happy for us to go ahead and give it a go – whoopee! This was the first time in a few months we had taken both the horses out together and I think we had all forgotten how joined at the hip they are!! They insisted on drinking out of the same bucket, eating from the same hay net and neighed to each other ALL day. Some might say it was cute? But I apologise to our lorry neighbours for any burst eardrums.

Gorgeous Gus was up first and as I had only given him his first canter the day before the aim of the day was to take it very easy. He warmed up beautifully but I went in just aiming to ride an accurate test and not to push him. I was delighted with how it went and didn’t mind what score we achieved I just felt grateful to have made it this far! Next up was cheeky George who, as expected, was his true ‘stallion-self’ and certainly made me ride every movement to avoid any sudden exits from the arena. I would describe it as exuberant and slightly vocal but I was actually chuffed with him for completing an accurate test.

After enjoying a yummy slice of cake baked by my great friend Chelsea, it was results time. I always hate this bit as no matter how little pressure I put on myself there are always those anxious nerves hoping you might have done well. I don’t know if anyone else experiences it but I just can’t seem to help it! Well… mum was crying when we saw Gus had come a very close 2nd place on 77% to our BYRDs superstar teammate and Georgey had also gained a 4th place in his earlier test on 68% - wow wow wow! This also meant my team won and we are off to the National Championships in August with BOTH the boys – I cannot believe it!!! 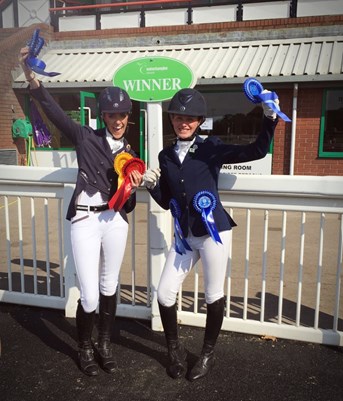 An introduction to the highs and lows of showing

The rest of July for Gus focused on taking it easy with some schooling and hacking but very little pressure. The same however cannot be said for George who had not 1 but 2 shows!! The world of showing is something my dear dad has a lot of experience in but I have absolutely zero and I think it is fair to say I don’t have a clue what I’m doing. With Gus out of eventing for now we decided to give it a go for the fun and see what happens…

First up we had the TRS Show which was our Second Round qualifier for Olympia. Having won our first show last month with 97% I was feeling really positive! George performed really well but it was quite hot and he was quite sharp so didn’t really fancy standing still. Unfortunately, we quickly learnt that this is probably the WORST thing you can do in a show and came out feeling like a naughty school child – ooops. One thing is for sure horses really are the best leveller.

Finally, we had the Trailblazer Championships at Stoneleigh Park. We had accidentally qualified for this at our first show but decided to give it a try. After our performance at TSR I was really quite nervous little George was going to get another telling off if he didn’t stand still but thank goodness he was a superstar and didn’t put a foot wrong. The show took place over 2 days with the scores being added together to decide the overall champion. We contested the Veteran showing championship and the Non-Traditional Coloured Championship and to my absolute amazement we won them both on both days making us the overall Champion of both classes! We were then told this meant we made it through to the overall supreme championship. I had no clue what this was, it was tipping it down with rain, but I didn’t care. To my astonishment we were awarded Supreme Reserve Ridden Champion 2018. For my third ever attempt at showing I would say I was beyond shocked and I have my gorgeous horse and supportive dad to thank for making it happen! Lots of prosecco was drunk and of course George got lots of carrots too. My #toptip for this month would definitely be to always persevere. After the TSR show I felt really disappointed and didn’t particularly fancy showing again. However, we picked ourselves up, kept working hard and I am so so pleased we didn’t give up! There is always another day with horses and who knows what is just around the corner. 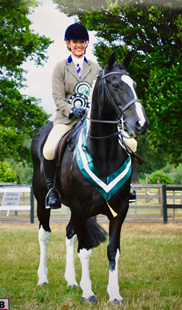 As if this July wasn’t manic enough I also had a quick trip over to Ireland and supported the Irish Student Rider Ball in Dublin. It was brilliant fun and so nice to catch up with our great Irish friends. We may have a bit of exciting news to share but that will have to wait until next month’s blog……

To catch up on Sophie's other blogs you can head here