The months are just flying by but I am happy to give you all an update on what I have been up too.

In September I was lucky enough to attend over 2 days the Dressage Championships at Stoneleigh Park to again watch my trainer and friend Levi William Hunt compete Glenys Hemmings Abbey Tiron. I always feel very lucky to watch this partnership and a huge amount of pride to know he is my trainer and despite the awful weather I had a great time with thanks again going to my mom for driving me there on both days. I also got the opportunity to watch other talented riders.

I have also faced my nemesis! The mention of poles used to bring me out in a cold sweat and fill me with dread but with everything I have learnt and feeling confident I took on the challenge and conquered them, not just at trot but at canter with even a few circles throw in. I was left feeling motivated with a new outlook of just maybe I can give anything a go and this is from people seeing my ability rather than my disability.

I then moved onto having ago at some flying changes and as always the wonderful Joy was with me every step of the way, she is a major part of the confidence I have found.

Joy is owned by Megan Hill who regularly comes to see me train at Abbey Dressage and is always there to support me and offer advice.

I then faced the poles again but on a clinic day and a chilly October morning with Levi and feeling positive I entered an arena with other riders and cantered a line of poles on an event horse. A trio of tasks I never envisaged doing but it definitely left me with a smile on my face.

October was also a change for Hugo who took a step across the yard to play with the big boys and girls of Dressage and moved to his new professional home with International Dressage rider Levi William Hunt at Abbey Dressage.

Hugo will continue his schooling with Levi and the equally talented rider that is Robbie McNeill. Im sure Hugo will excel in his new surroundings and show us the star I am sure he is going to be.

And then the big challenge!

After 15 months away from competing for a variety of reasons, could I face my first ever Prelim test? and YES I did it!

On Sunday 4th November with the support of my trainer, Nicky Hill who very kindly called my test, Megan Hill and everyone at Abbey Dressage I stepped back into the dressage arena to put the past behind me and rode a great test which unfortunately did include a spooky moment but unlike before I dealt with it and rode onto a 5th place result.

Onwards and upwards now, looking forward to the next competition and my next test. Going out to compete again at a new level may seem small to some people with it being Prelim level but it really was a huge hurdle for me which would not have been possible without the support team I have around me both at Abbey Dressage and at home. 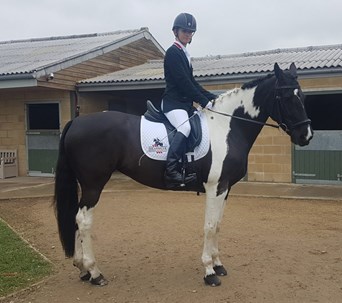 You can catch up with Daniel's other blogs here