The start of the season for Shearwater rider Flora Young

'We took four horses to the EMDG ODE at Osberton, Lennie, owned by Kate Walters did a smart dressage of 30.5, topped off with a double clear to come 3rd, not bad for his 2nd ever event!'

'Then Ladybird added a few extra moves in the dressage to score not such an impressive 39(!) but jumped a great double clear despite having very low mileage and having not seen an XC fence since last year.' 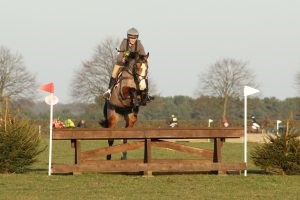 'Austin, owned by Antonia Bealby, was the star of the day, scoring a 24 in the dressage & double clear to lead from start to finish, clever boy!'

'Patrick, owned by Cathy Jefferies did a sweet test for 35.5, then had a slightly unfortunate slip up in the showjumping, but he is completely fine & I’m very grateful I was wearing my Champion Evolution Pro hat, definitely saved me from a nasty head injury!'

'We were due to be back on the Sunday with Dolly, however after my fall it was decided it wasn’t the best idea to ride her so she was a bit confused being all dressed up, with nowhere to go!'

'Onwards and upwards to Oasby, with a bit of showjumping between now and then.'