BHSII International dressage rider and trainer Sara Gallop will be partnering with BKS Fantasia in the 6-year old finals. No stranger to this competition she also trains with young horse experts Carl Hester MBE and Charlotte Dujardin OBE

She has qualified for every young horse championship class for 2018 as well as being selected for the World Breeding championships in Ermelo August 2018. She is a very clever mare and loves attention.

No my Grand Prix horse Don Diego won the National 5yr old championships and I have qualified young horses most years for the semi finals and championships.

What will you be doing to prepare for the finals of the Shearwater YH classes?

Just working on her scales of training and developing her strength and fitness during the summer.

The end goal is Grand Prix. I will give her a little break over Christmas as she has had a busy show season.

The tests provide a great opportunity for young horses to start the more advanced movements and the venues provide a championship atmosphere for there education. 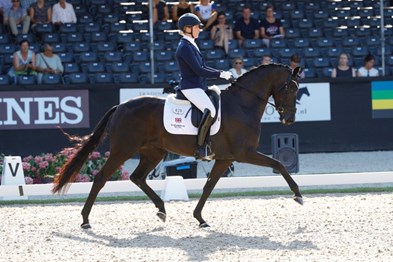 GB rider Matt Frost is no stranger to success with an abundance of national titles to his name. He will be riding G Star in the 4-year-old championship class

I acquired G Star in April who I bought from my good friend Henry Boswell. I have just done the premier league shows with him to give him experience in a big atmosphere. At home he is really laidback - he spends lots of time in the field to give him time to develop and grow.  He is so trainable and enthusiastic in his work.

No I have done lots of them!!!  I have been lucky enough to win them twice before on Uthopia who went on to win Olympic medals with Carl Hester and Summerhouse Don Diego who has also had a very successful career at Grand Prix with Sara Gallop.

Well G Star has just had a holiday so I will be gradually bring him back into work.  Lots of hacking and improving his fitness.  I want him to continue to have a good experience in the arena at Stoneleigh and just look forward to riding him there.

I have no further ambitions with him for the rest of the year.  I will probably give him another holiday before the winter sets in and will the work on his general education.

I like the opportunity to give the horses exposure of a higher level show environment.

premier league shows.  I love to see all the young horses at the finals and try to pick my