Sophie Hall - Snow and a visit to Spain

I hope you have all had a lovely Easter weekend with lots of egg hunting and chocolate indulging. I have no shame in admitting I have eaten my body weight in Easter eggs – poor Gus and George!

This month has been a bit of a frustrating one with the typical British weather playing havoc for us eventers wanting to get out and about. As I sit here writing this blog the torrential rain is battering down outside my window and I really am wondering whether we will ever manage to start the season?!

Gus and George have been very good this month despite a few unusual days of no turnout due to the heavy snow. Gus was getting ready for his first event at Swalcliffe Park where he was entered for a nice, straightforward, BE100 run. He has been feeling fab so we were really gutted when we heard the event had to be abandoned. Our next event is now planned for Kelsall Hill at the end of April so everything crossed the sun comes out and it can go ahead. I will certainly be doing the sun dance.

In the meantime, we had a Cross Country schooling session planned with Michael Owen but once again this was sadly cancelled due to the ground. Nevertheless, determined to do something we have managed to get out to the gallops at Broxton Hall which was brilliant fun. 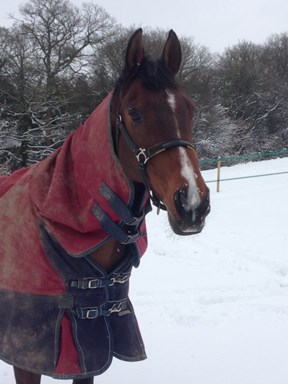 Thankfully we have managed to go out and do a bit of dressage this month with both the boys. We competed in the Dengie Dressage Winter League and this was the very first time I have taken them both out to a competition together – very exciting! We were absolutely delighted that they placed 1st and 2nd in the first rounds qualifying them both for the Regional Finals. Gorgeous Gus came out on top showing he hadn’t lost his twinkle toes whilst George produced what could be described as more of a ‘firey’ performance, embodying his inner stallion the moment he entered the indoor arena and thought his best friend had been eaten by a monster. Fair to say I learnt a lot and made sure we were prepared to give George much more warm up for the regionals. I was really pleased with both the boys at the regionals and definitely felt they both improved significantly on their previous performances. They placed 6th and 7th with George beating golden boy Gus this time. I felt Gus had given me one of his best ever tests and was really excited but sadly it was one of those days where the judge just didn’t agree – you win some and you lose some! This is where my Top Tip comes in this month: sometimes we all need days like these to take a step back and reflect on how we are doing. If we won everything we would never learn as much and I definitely feel the less successful days teach me a lot more as a rider. I almost need things to go a little bit wrong sometimes to give me that extra push to work even harder to be the best I can be for my horses.

I am so grateful to my parents who come and support me at all these events and listen to me rabbit on and on about the results for several hours on the journey home. I really could not do it without them.

A special visit to the professionals!

I was very lucky to visit Sam Griffiths one weekend this month – wow wow wow! He really is such a lovely guy and his team work incredibly hard, yet never stop laughing and smiling. I spent one day on the yard and got to hack out a few horses and on the second day we headed to Gatcombe Horse Trials with 3 of Sam’s top horses, including the legendary Paulank Brockagh, and his adorable dog Pippit. It was such fun to see how a big professional yard is run and despite the 4am wake-ups I had the best, best time! It certainly made me appreciate how much time I spend faffing over little jobs back home which just cannot be done when you have as many horses as Sam.

Finally, we wrapped up the month taking a team of 3 British young riders to the Nations Cup in Spain, the first student riders competition of 2018. It is a slightly unusual competition in that we compete in both Dressage and SJ on unknown horses in a knock-out format which reaches up to PSG freestyle and 1m30. I was managing the team as Chef d’équipe and we all had a brilliant time. Each evening there was a social activity, including a fancy dress party where we got to get our sparkle out and dress up as unicorns. I got to ride for some of the Spanish owners whilst I was over there, warming up for the competition which was great. It was fascinating to sit on some Andalusian Stallions, something we so rarely see in England! Overall, the team came 5th out of 18 teams and we also picked up some individual placings including silver and 5th. Everyone worked so hard and played hard too so I am so so proud of them all! It was great to catch up with all our international friends and it has made me really excited for the next one! 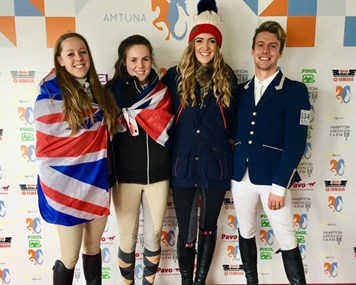 It is both my mum and dad’s birthday’s this month so I am looking forward to celebrating with them and fingers crossed finally getting out with Gus for some XC asap – I really cannot wait any longer!

I hope everyone has a fabulous, fun April and let’s hope we get to see some sun soon!